skip to main | skip to sidebar

In 2007, Witty's Lagoon... so hesitant, and inexperienced 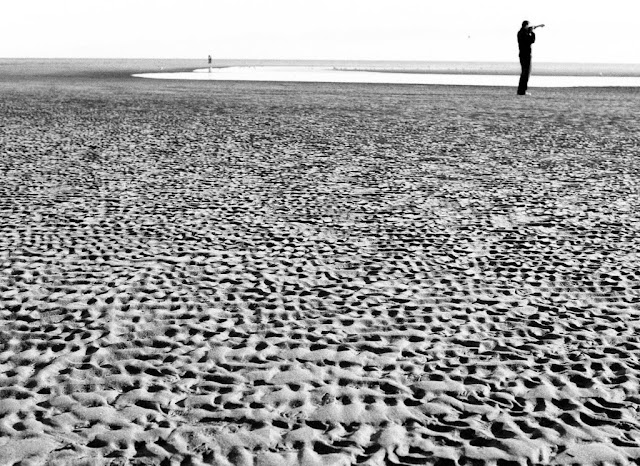 Space, I walked away from you. Your space lets me feel at ease - sun and shadow. Bodies separate with tranquil distance - water and texture. I point to remember; he points to identify. I wandered back then; I didn't know: a single moment never repeated. So hesitant, and inexperienced - dad's camera. Does my eye know how this scene will form? - blacks, grays, and whites; I will learn. You seem void yet you fill my eye. I have dreams of you - Witty's Lagoon.  I've come to you many times, like a familiar face you will nurture me and I will remember you forever.
Posted by mathenley at 10:11 AM No comments: 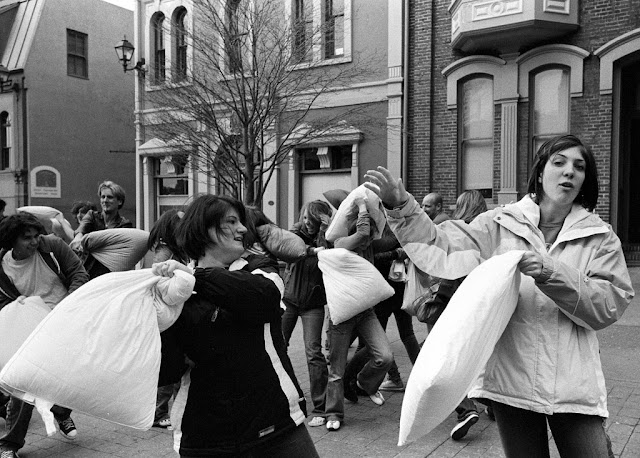 I remember this day quite vividly, the air was chilly and the sky was Victoria gray; no surprise there! The pillow fight was a Flashmob, planned to start around one o'clock, if I remember correctly. I showed up about half an hour early; I always like to get a sense of the environment and the light situation. At this point I only had one camera, my trusty Nikon F3 with an 85mm f1.4. I opted for a high speed 1600iso film, but it might have been a case of whatever's leftover.

I sat on a bench - pretty sure I was one of the first people there. I watched them trickle in, but participants were not supposed to show up with unconcealed pillows, and they are meant to be hidden until the first cry is sounded. One by one with oversized backpacks or pillow-shaped garbage bags they showed. I did not participate, I was there to document. I felt the anticipation of these people. We all looked at each other: " I know why you're here!" It was great, but their numbers were not great (this is Victoria after all). I knew I was going to get a great photo out of this.

The call was sounded at the strike of one o'clock, PILLOW FIGHT!!! I stayed back from the mêlée initially, they were swinging like madmen and madwomen. I wanted a wider shot to give a sense of the space. Bastion Square was a great place to have this pillow fight. Slowly I moved in and started to mingle with the fighters, and they were quite respectful. I heard someone yell: "careful, not the photographer." What a sense of importance, almost like having an anti-bully pass. I only had five minutes - that was the designated time allowed before the participants had to abandon their posts and move on like nothing happened.

Now this aptly titled photo, Pillow Fight, is a decisive moment. "The decisive moment, it is the simultaneous recognition, in a fraction of a second, of the significance of an event as well as the precise organization of forms which gives that event its proper expression." (Henri Cartier-Bresson) . There is such a sense of innocence, and friendship and smiles that are seen everywhere throughout this photo. I love the two girls in the foreground - their expressions are priceless: "oh you are going to get it, this is how i used to pillow fight, over head-swing" - " Nnnnooooo! I'd rather pose for a moment, can't you wait until after the photo is taken" There are two girls in the background, one laughing hysterically. She seems like she can't grasp that she's an adult taking part in a pillow fight with total strangers. The other girl appears to be overwhelmed, covering her head to protect herself.

I love to look for the fighters feet in motion, pillows that are grasped firmly - to look at the folds of the pillows, the accomplices in the fight. They complete and situate a scene like this that does not necessarily need any explanation. The architecture adds beauty to the setting, to the photograph, and to the lone unaccompanied tree, so bare and observant, serving as a seasonal waypoint. I've been looking at this photo for over two years, and it stands as one of my favorites. It is endlessly fascinating, human interaction at its happiest.
Posted by mathenley at 9:18 PM 2 comments:

How to read my photographs 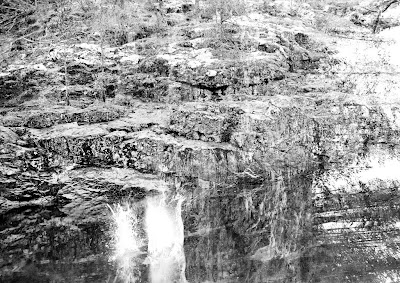 I  always wanted to start a blog, since i became involved in photography - to use it as a private tool to reflect on my growing passion and learn how to write in a self-expressive manner that could critically analyze photography. That never happpened; I signed up to Flickr, which over time became a useful tool,  but my commitment to it was only to post photos with clever titles. Well I've stood by waiting far too long. I firmly believe that my photography is an extension and representation of my psyche; yet few words of true introspection have ever been uttered on my own part.  It's time for me to be critical and learn how to read my photographs.

Posted by mathenley at 7:52 PM No comments: